Our office is open 10am - 2pm daily; staff are working 2-3 days/week at the center. Please visit “Meet our Staff” to contact our staff.

What’s in bloom in Forsyth County?

We took photos of what’s in bloom throughout the growing season in 2020.

The plants can be viewed in person at these gardens maintained by N.C. Cooperative Extension, Forsyth County Center, with the assistance of Extension Master Gardener℠ Volunteers:

If you want to learn more about one of the plants you see here, check out the NC Extension Gardener Plant Toolbox at plants.ces.ncsu.edu.

Early flowers put on a show in April. Highlights included spring ephemerals, flowering shrubs, and several types of flowers that grow from bulbs which are typically planted during the fall. 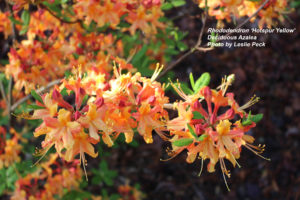 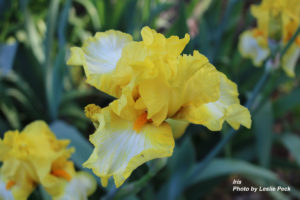 A yellow iris blooming during April. 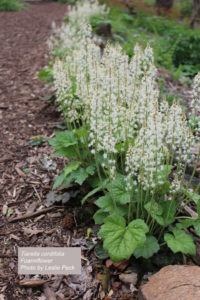 Foam flower is a spring ephemeral that bloomed in April.

Late spring flowers flourished in May, bringing lots of color to the gardens. 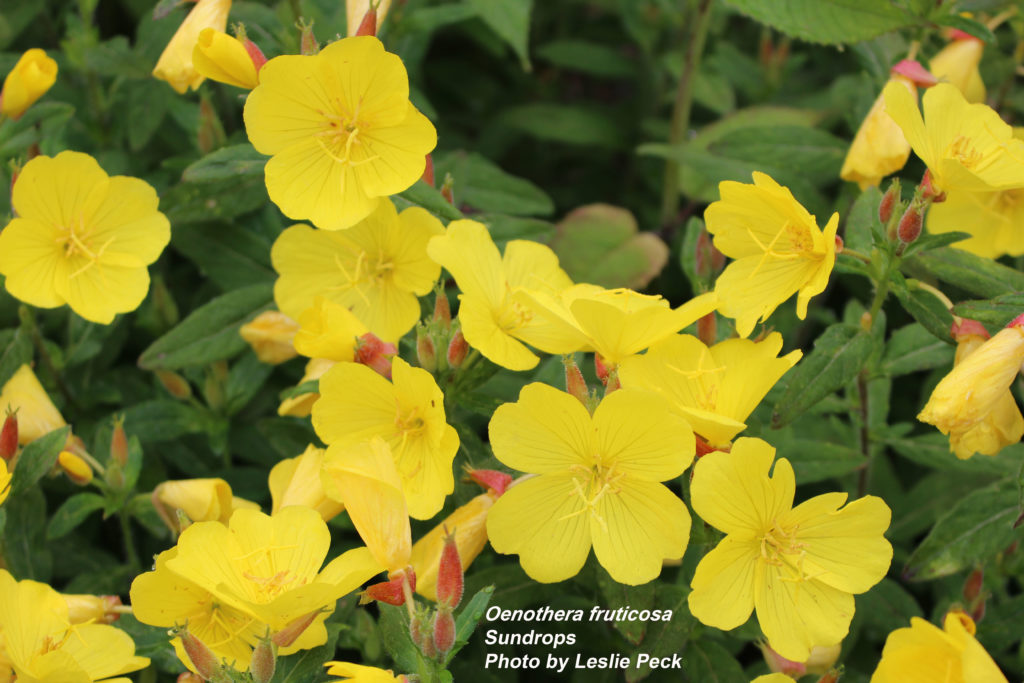 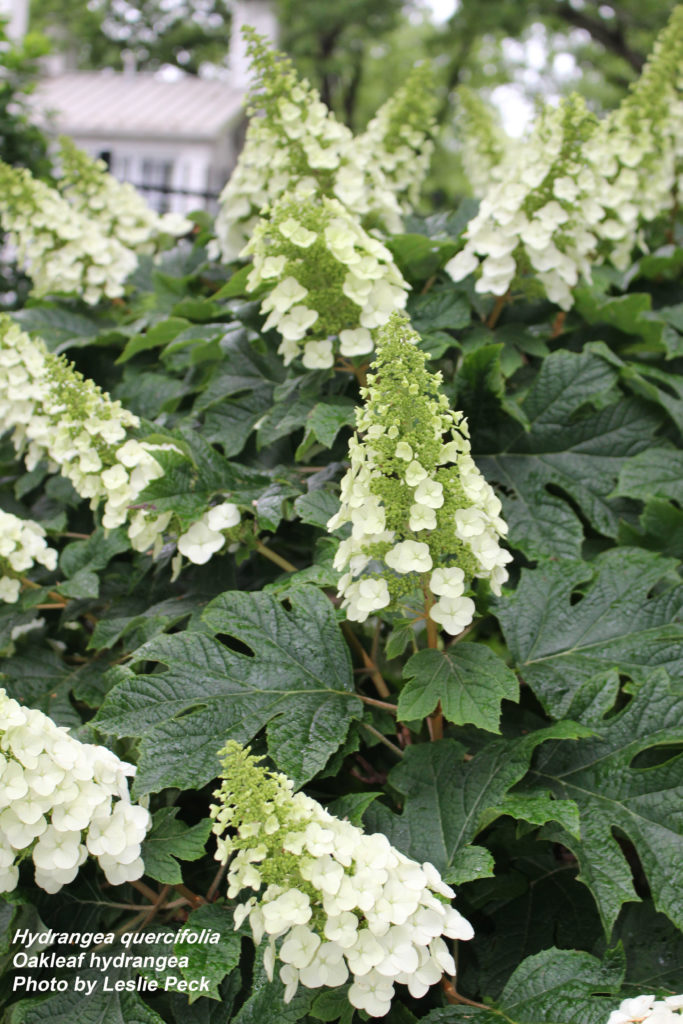 Hydrangea quercifolia, oakleaf hydrangea, blooms in May. These flowers come from buds that form during the previous season and overwinter on the plant.

Summer arrived in June, with a variety of flowers, including annuals, perennials, and flowers of fruits and vegetables. 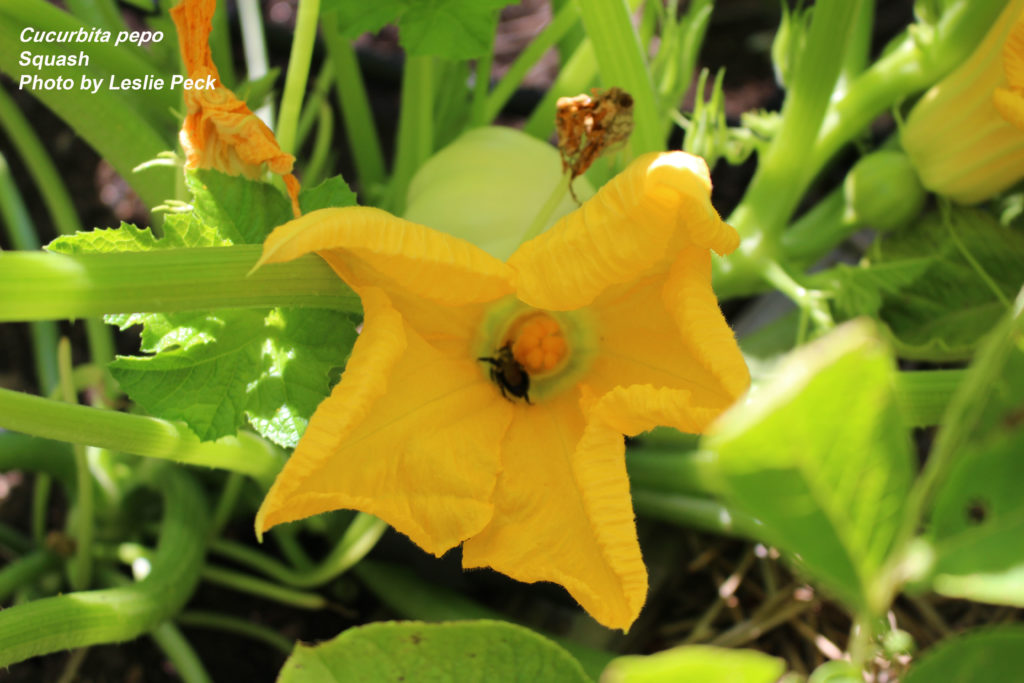 Squash plants bloomed in June, with fruit to come later in the season. 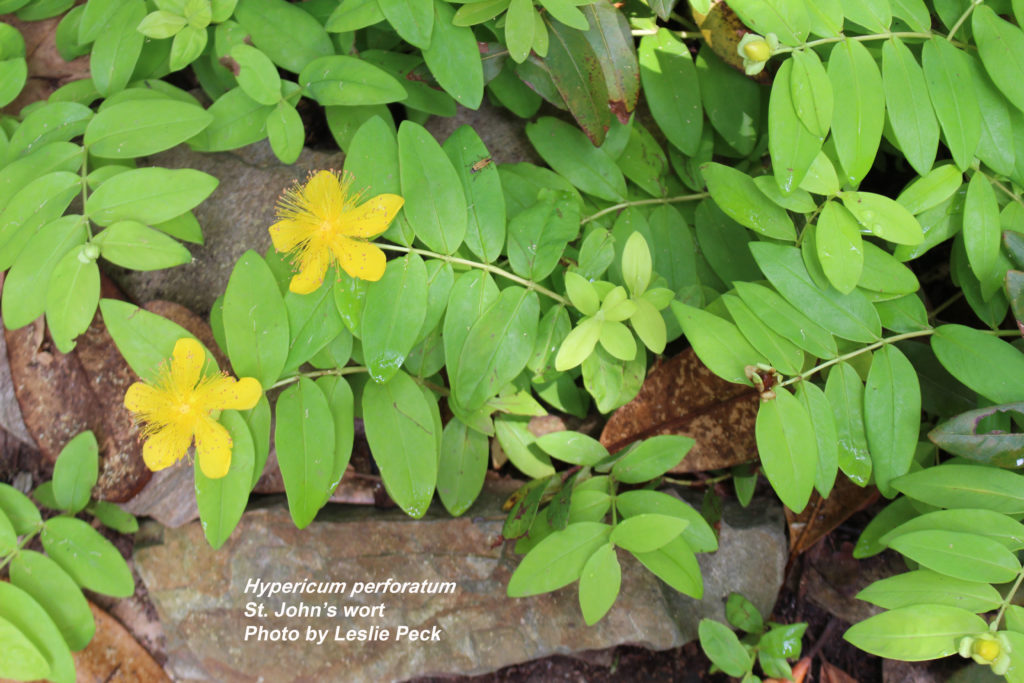 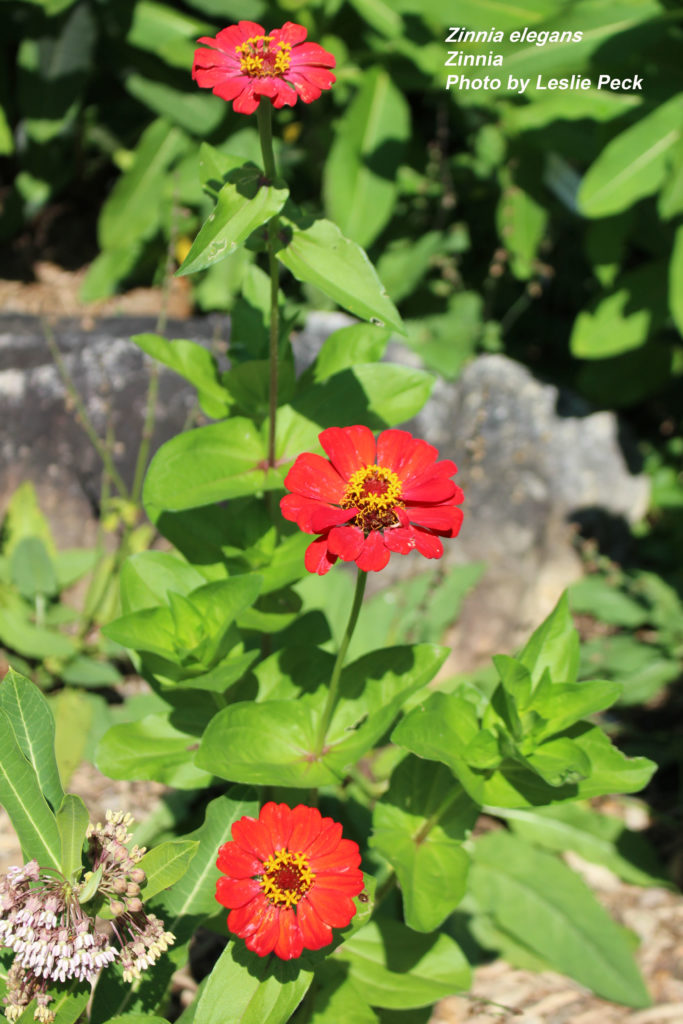 Zinnias started blooming in June and continued putting on a show all the way until the fall.

The summer heated up in July, bringing lots of color to the garden. 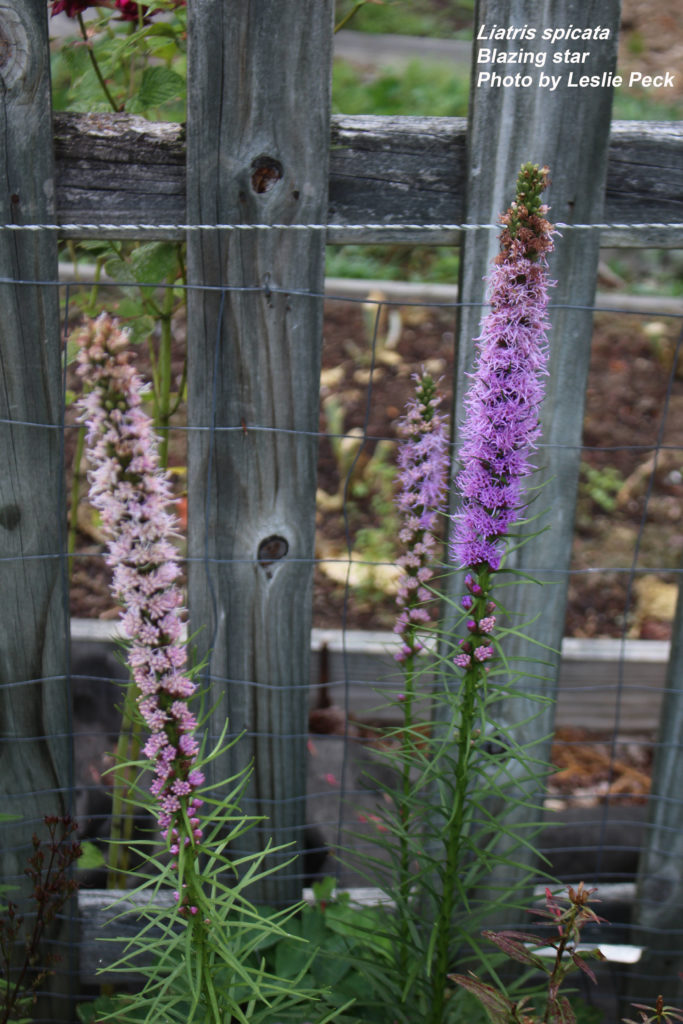 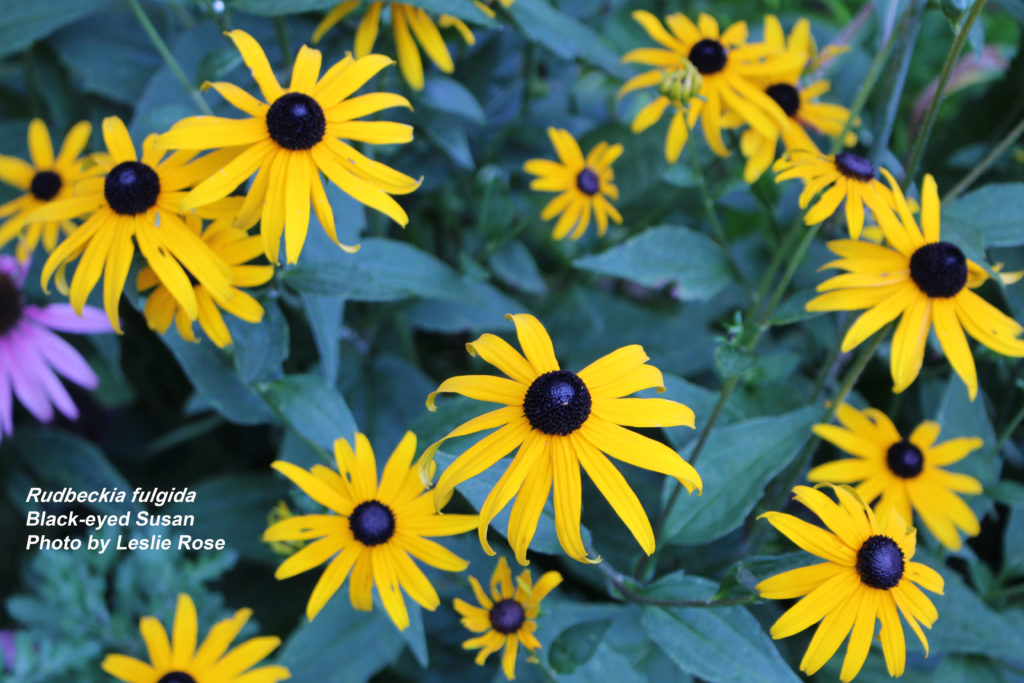 Black-eyed Susan is an easy-to-grow perennial that was blooming during July. 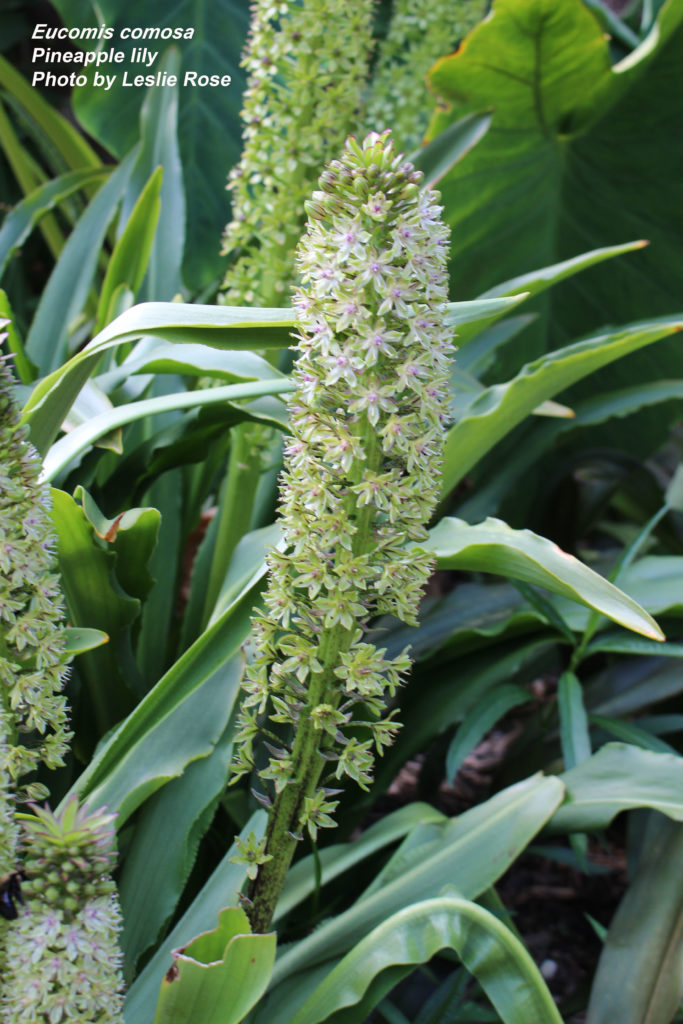 Pineapple lily is a perennial in our area, but it brings the tropics to our back door.

August brought a beautiful mix of late-summer flowers and the first signs of fall flowers. 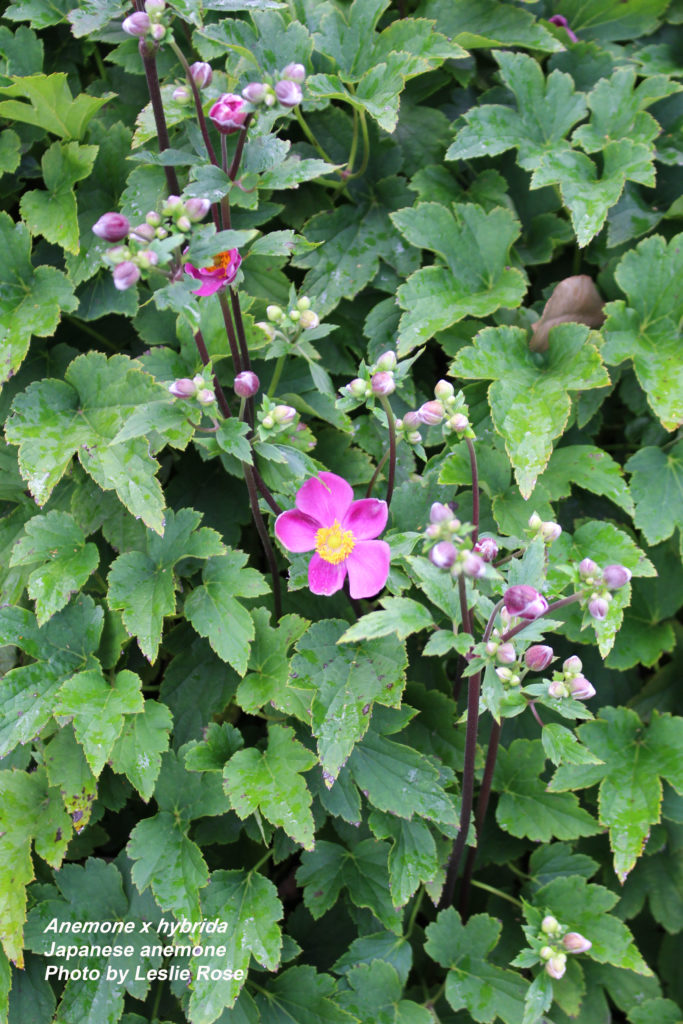 Japanese anemone began blooming in August. This plant blooms well in a shady spot and brings flowers into the fall. 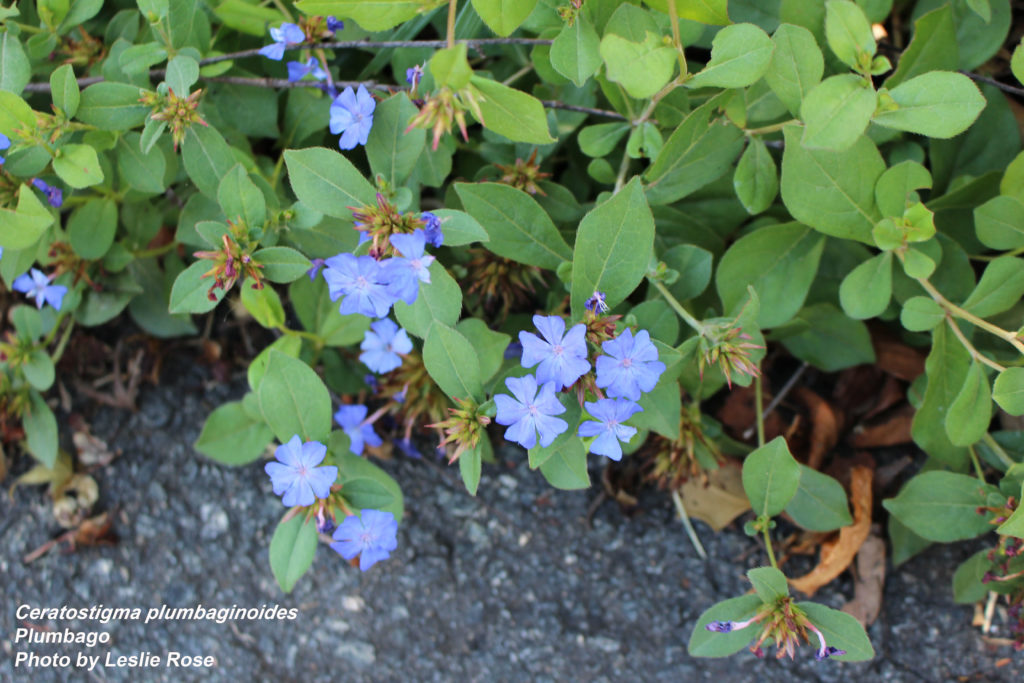 Plumbago is a groundcover that was blooming through most of the summer. 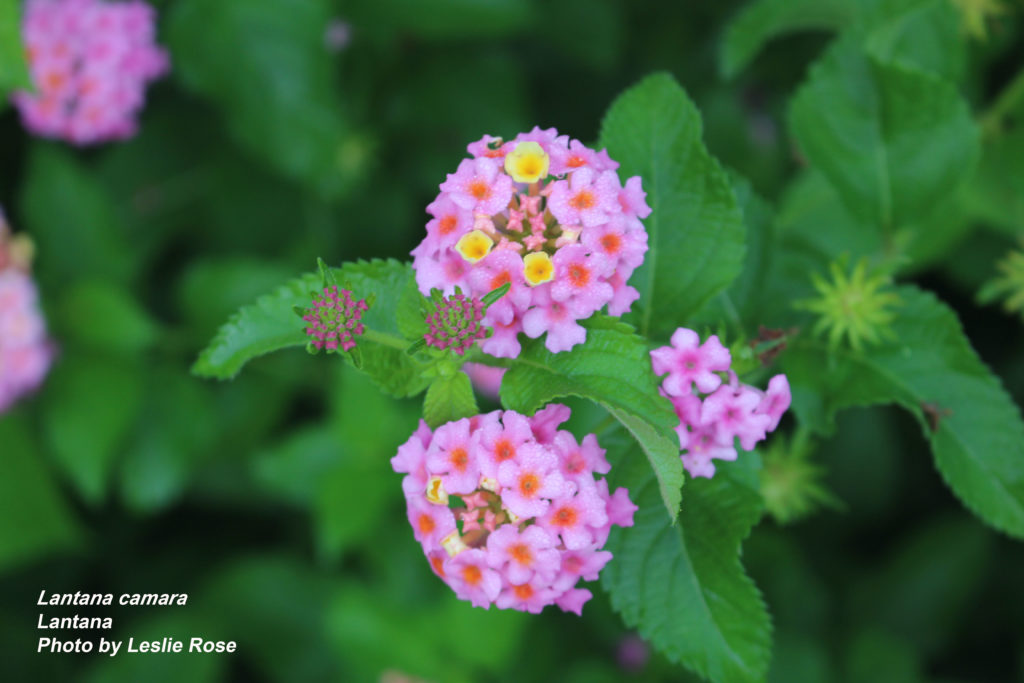 Lantana is often grown as an annual, but can sometimes survive as a perennial in our area. It bloomed and attracted many insects to the gardens in August.

With September came the real signs of fall. Late-blooming flowers and the first signs of the leaves changing, plus a few cooler days. 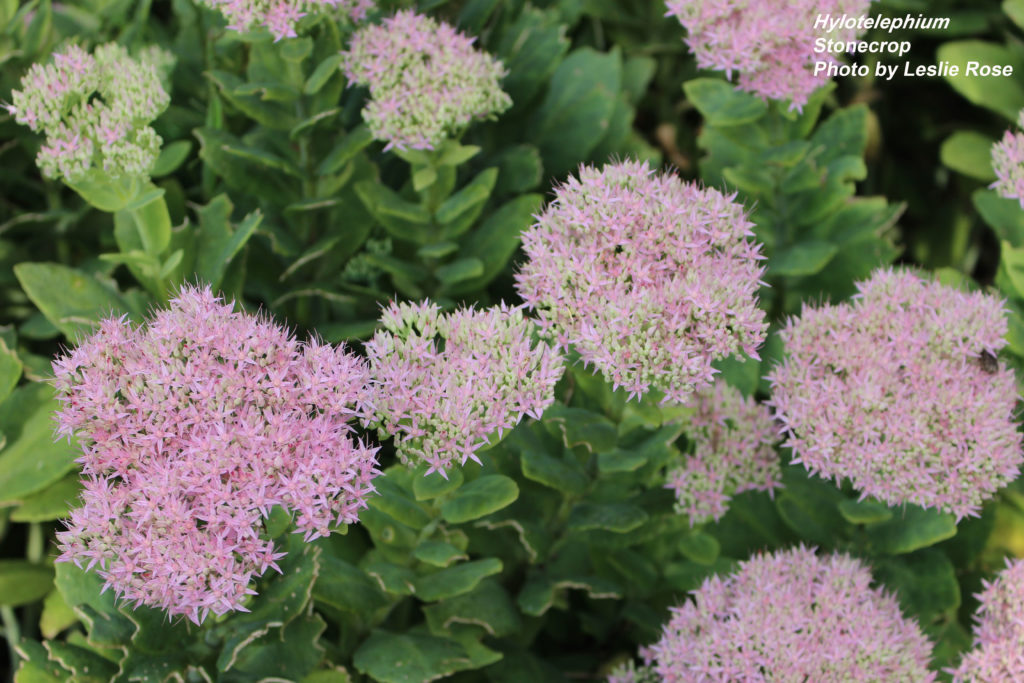 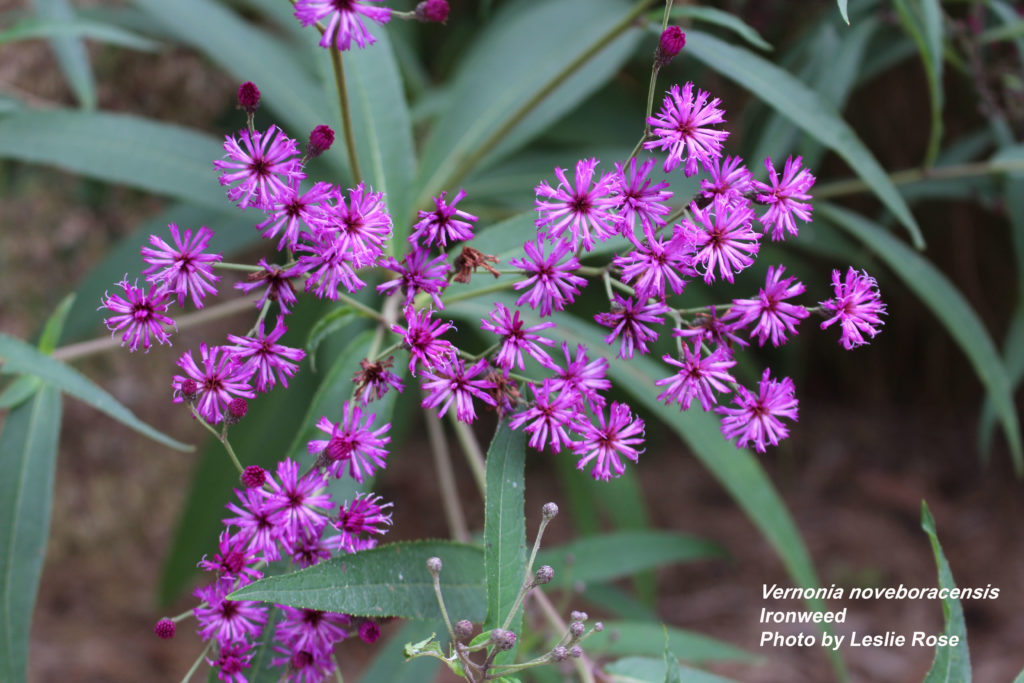 Ironweed is a tall plant with deep purple flowers that we enjoyed this fall. 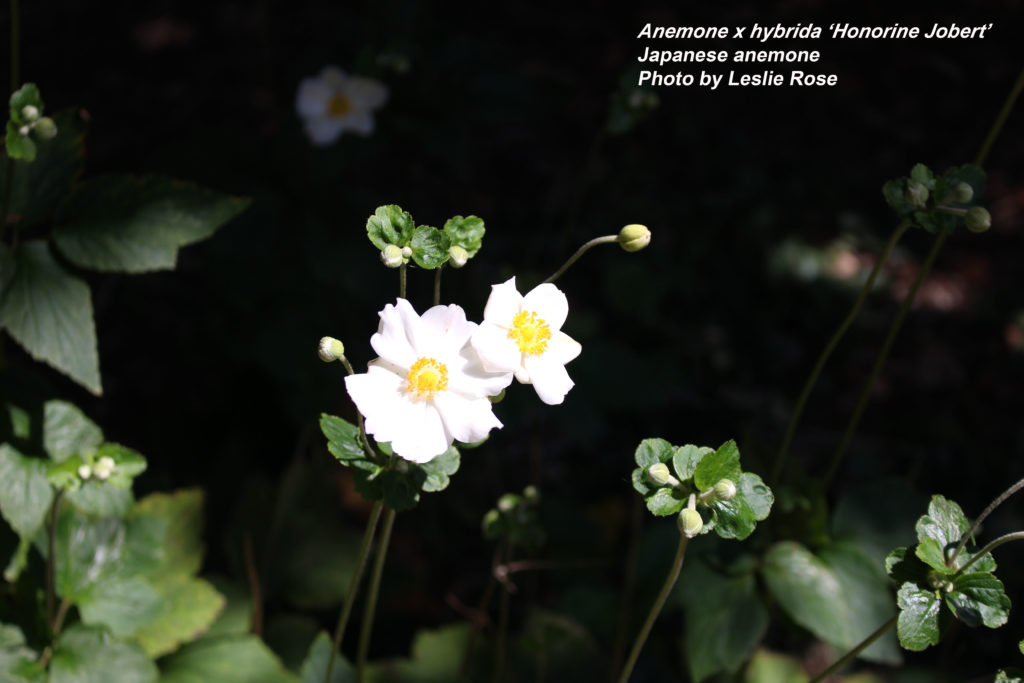 The ‘Honorine Jobert’ cultivar of anemone bloomed later than others. The white flowers seemed to glow in the gardens during September.

Fall was in full swing during October, with lots of changing leaves and still some flowers for visitors to admire. 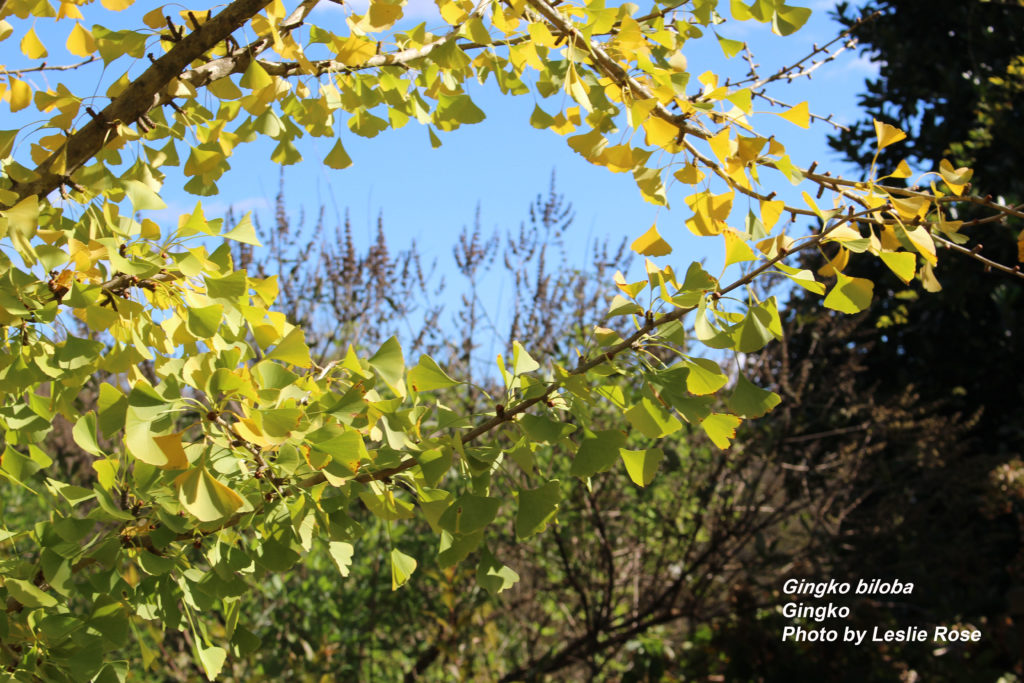 Gingko leaves brought a spectacular yellow color to the gardens in October. 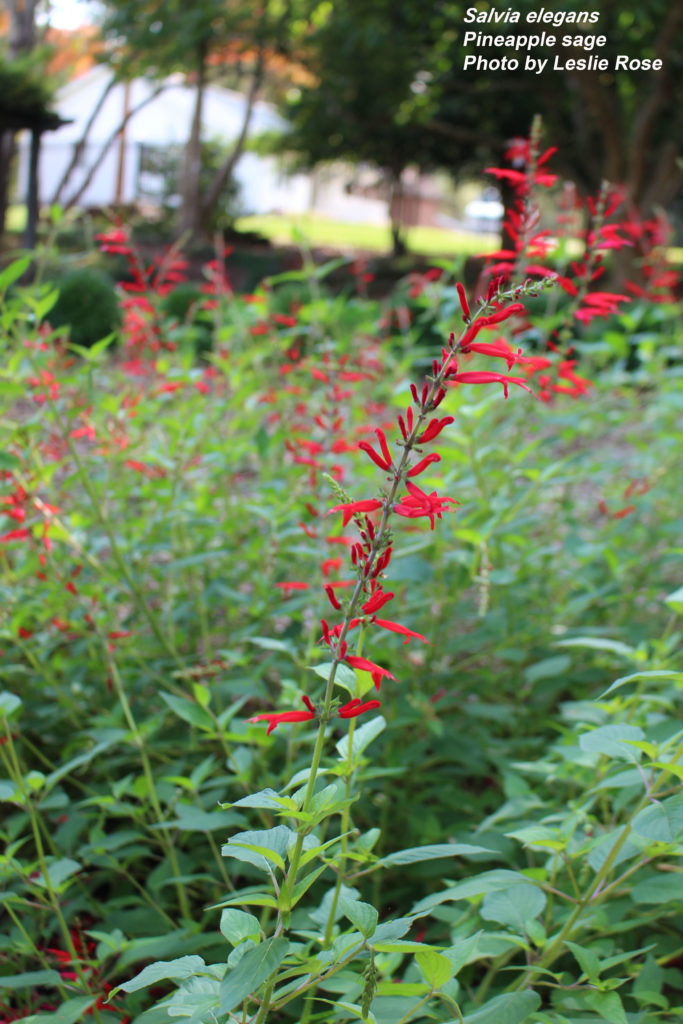 Pineapple sage blooms later than many of the other salvias in the garden. The red blooms really stood out in October, and even attracted some late-season hummingbirds and other pollinators. 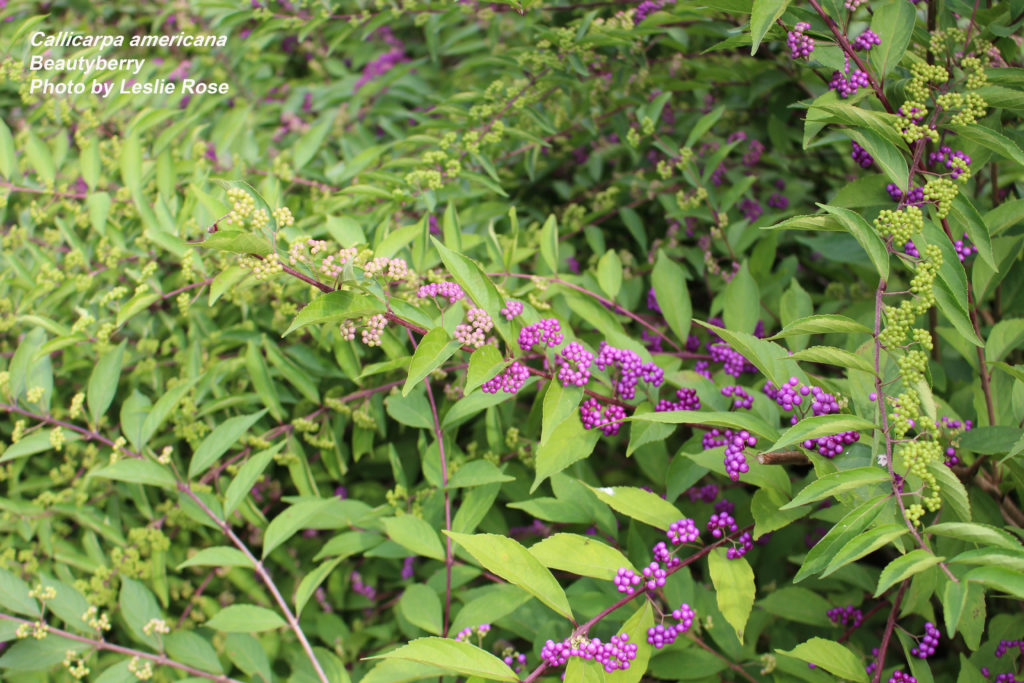 American beautyberry bloomed in the spring, bringing an abundance of purple berries to our gardens in October.

With the growing season winding down in November, there were still a few flowers and other fall color to enjoy. 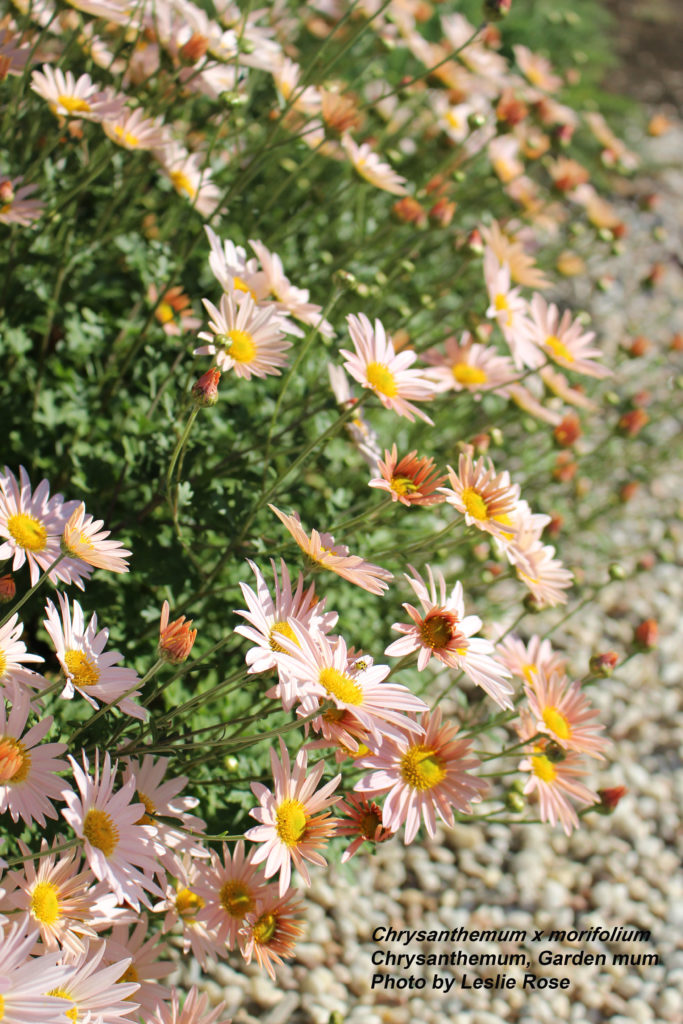 Chrysanthemums are a classic fall flower that we enjoyed into November this year. 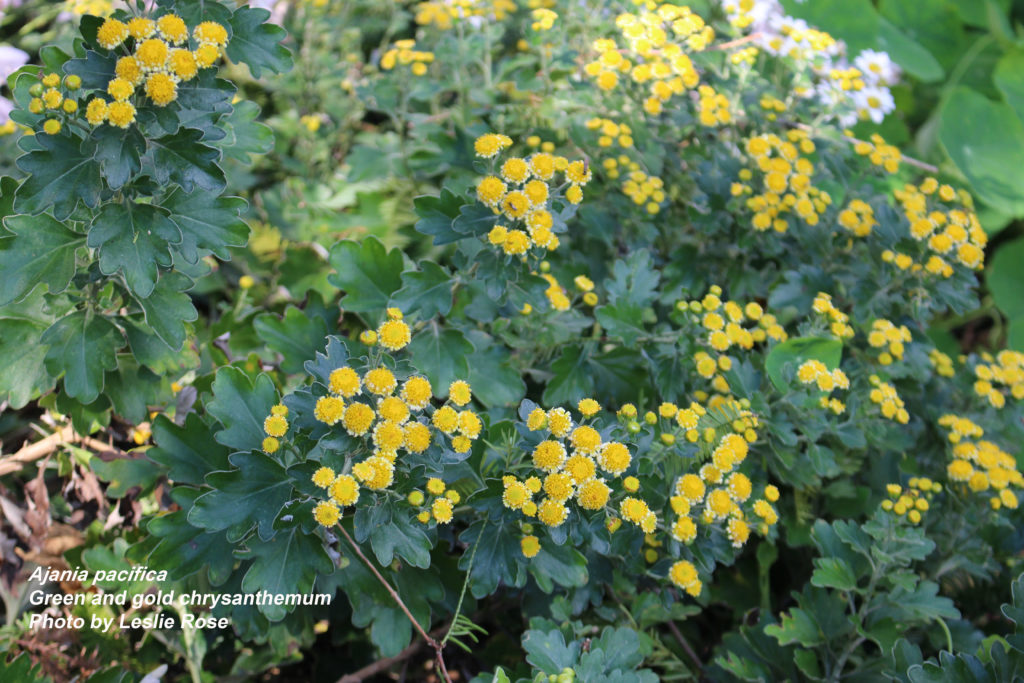 Green and gold chrysanthemums brought small yellow flowers to the gardens into November. 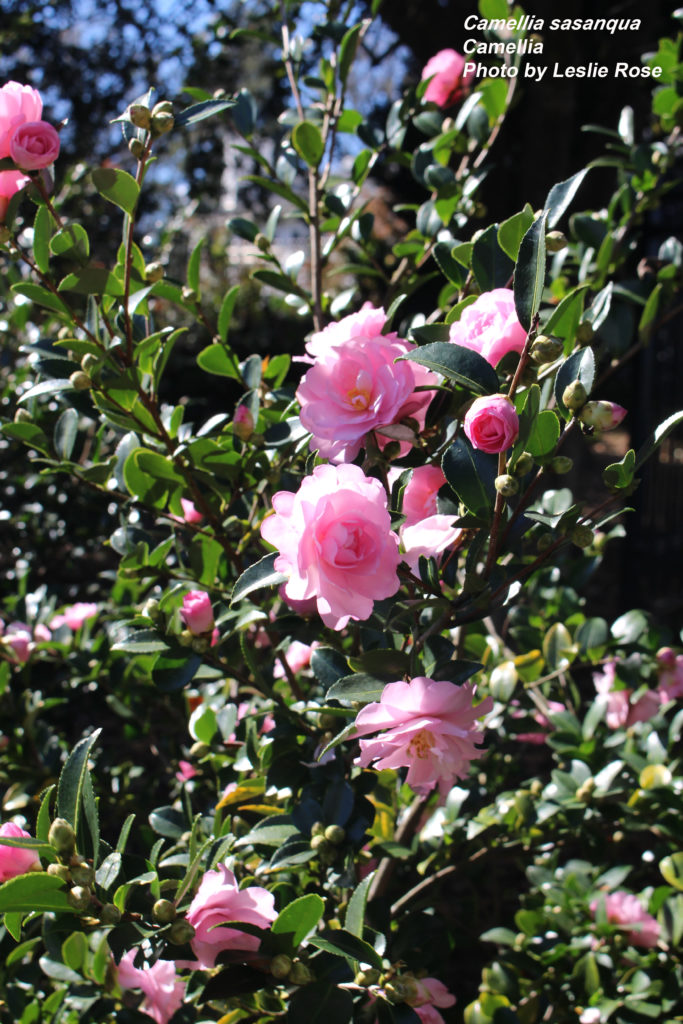 Sasanqua camellias put on a show in the late fall.

Click here for the folder of archived “what’s in bloom” photos.

Looking for our email lists?

We have a list of all of our e-mail newsletter offerings.