What Do I Do About Powdery Mildew in My Garden?

Find this article at:
go.ncsu.edu/readext?816965
— Written By Leslie Rose

Late in the summer is a common time to find powdery mildew in the garden. Powdery mildew is a common disease in the garden, affecting annual and perennial plants, as well as shrubs and trees. The disease is caused by a group of closely related fungi. Most of the time the fungi causing powdery mildew are host-specific, meaning that a single pathogen infects one or a few species. Some plants that are commonly impacted by various powdery mildew include crape myrtle, dogwood, phlox, zinnia, roses, cucumber, and squash. 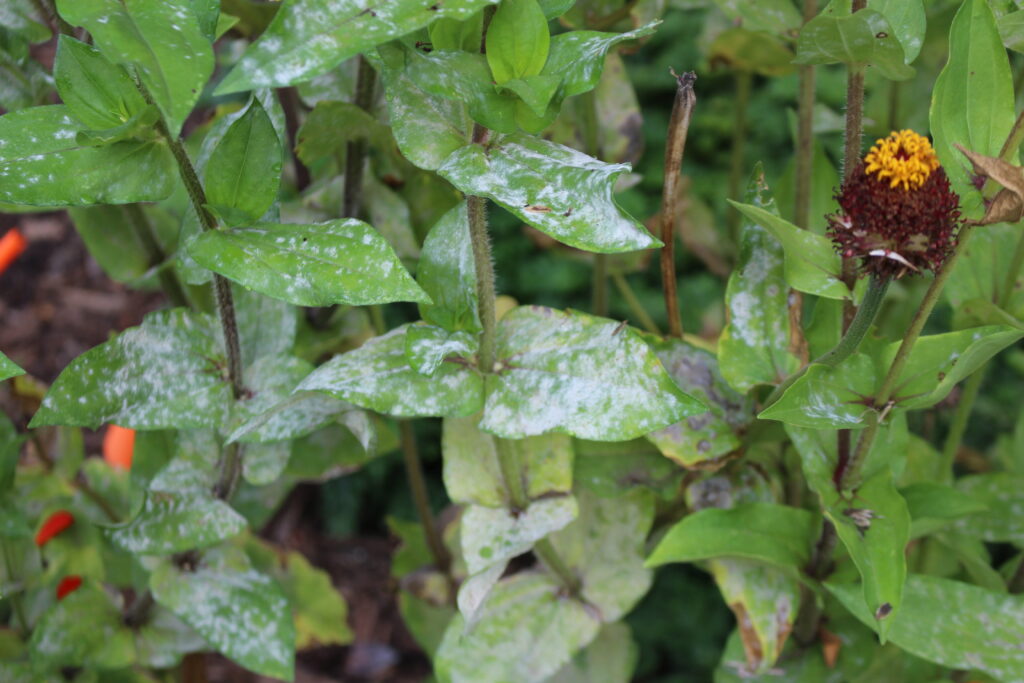 Powdery mildew on the leaves of zinnia in August.

Powdery mildew gets its name from the whitish or gray spots that appear on the surface of infected plant leaves. The spots you see are actually the mycelia, or part of the fungus, growing on the plant.

Powdery mildew, unlike many fungi, does not need free water to develop. Instead, humidity is an important factor related to the instance of powdery mildew. High humidity conditions are conducive to spore formation of powdery mildew. Often, powdery mildew infection appears when days are warm and nights begin to cool in late summer or early fall. Proper spacing of plants, pruning to increase air flow, and avoiding excess moisture on the foliage of plants can help reduce humidity.

Another way to reduce the instance of powdery mildew in the garden is to choose and plant resistant cultivars. Some cultivars, or varieties, of plants are less likely to develop powdery mildew than others. Chicago Botanic Garden and Mt. Cuba Center are two gardens where trials have been done to determine resistant varieties of plants that are often susceptible to powdery mildew infection in the landscape. 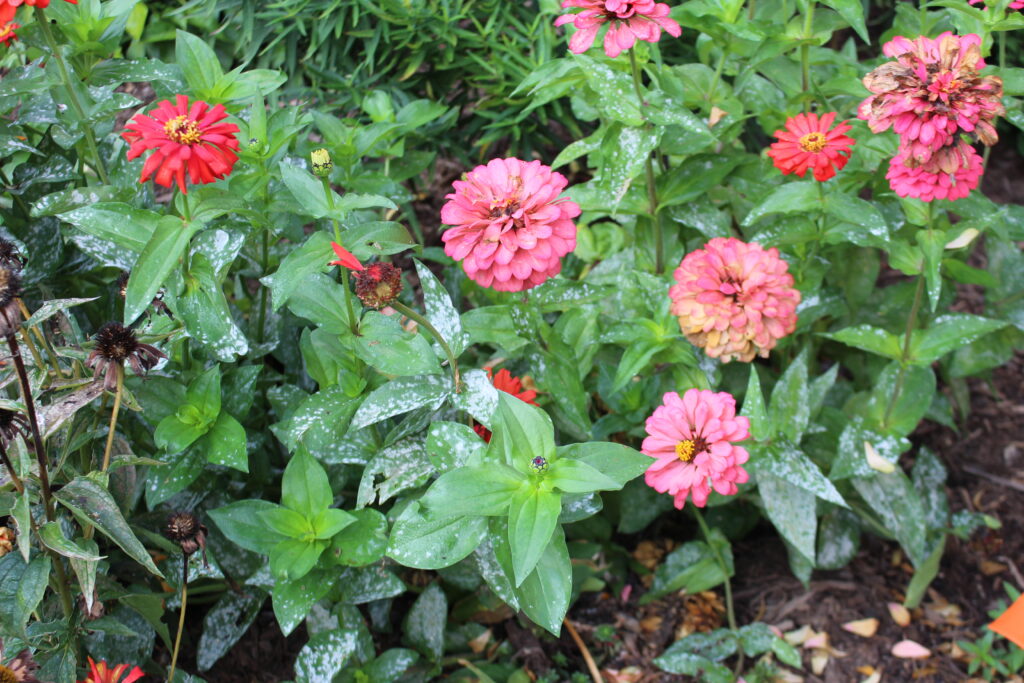 The white spots on the leaves of these zinnias are a sign of powdery mildew.

So what should you do if you have powdery mildew in the garden?

The good news is that though powdery mildew negatively impacts the beauty of your garden, it typically does not kill the plants it infects. If you notice powdery mildew in your landscape, it is a good idea to remove infected tissues. For severely diseased plants, removal of the entire plant may be warranted, but in other cases, the infected foliage can be pruned out. Be sure to remove all infected tissues from the garden to prevent the overwintering of powdery mildew fungi in the plant debris.

Fungicides can protect healthy foliage of the plant from becoming infected with powdery mildew, but have little curative action. If you choose to use fungicides, be sure to follow the chemical label and wear proper protective clothing. It is also useful to consider the season when you are seeing infection. Typically, late-season foliar diseases do little damage to deciduous plants that lose their leaves in the fall. When leaves do fall, make an effort to rake and remove them from the garden.

If you’d like to learn more about powdery mildew and resistant plants, visit the links below.

We also have a few other email lists you can subscribe to.