Masks are required inside all county buildings and social distancing is recommended.

Find this article at:
go.ncsu.edu/readext?594830
— Written By April Bowman and last updated by Kitrinka Gordon 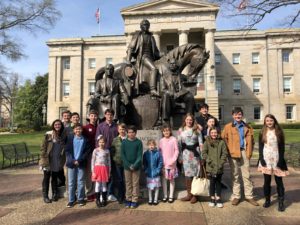 On Tuesday, March 19, 2019, the Forsyth County 4-H Trailblazers Teen 4-H Club took a trip to Raleigh, NC for Capital Fest, which is organized by North Carolinians for Home Education (NCHE). The event, which is held biennially, is highly anticipated by homeschoolers around the state. There are several workshops and tours offered that are suitable for younger and older children alike.

This year, the teens made appointments to meet with two of our state legislators. Regretfully, Representative Donny Lambeth (District 75, Forsyth County) had scheduling conflicts, but we were able to meet with Senator Joyce Krawiec (from District 31, which includes Forsyth and Davie counties). We learned Senator Krawiec is a 4-H alumnus, and she said she’d love to speak at our club at an upcoming meeting this year!

Another privilege we enjoyed this year was hearing several state government officials speak for five to ten minutes each. It was very encouraging for both parents and teens to hear, and our club really enjoyed this experience. Many of these legislators were former public educators and home educators. It was surprising to see how many were former and current homeschoolers!

One of our favorite workshops during our trip to Capital Fest was attending a workshop on the executive branch of government, led by Lieutenant Governor Dan Forest. He told us about his life, background, how his children were homeschooled, and then he opened the floor for questions. His speech was uplifting to children, as well as parents.

Capital Fest had so much to offer this year, and we were so privileged to be able to talk our government officials! The Trailblazer Teens had a blast at NCHE’s Capital Fest and can’t wait to return in the coming years! 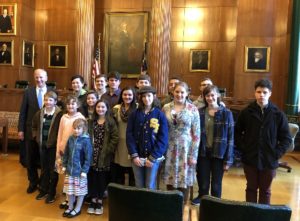