Find this article at:
go.ncsu.edu/readext?467309
— Written By Kitrinka Gordon and last updated by April Bowman 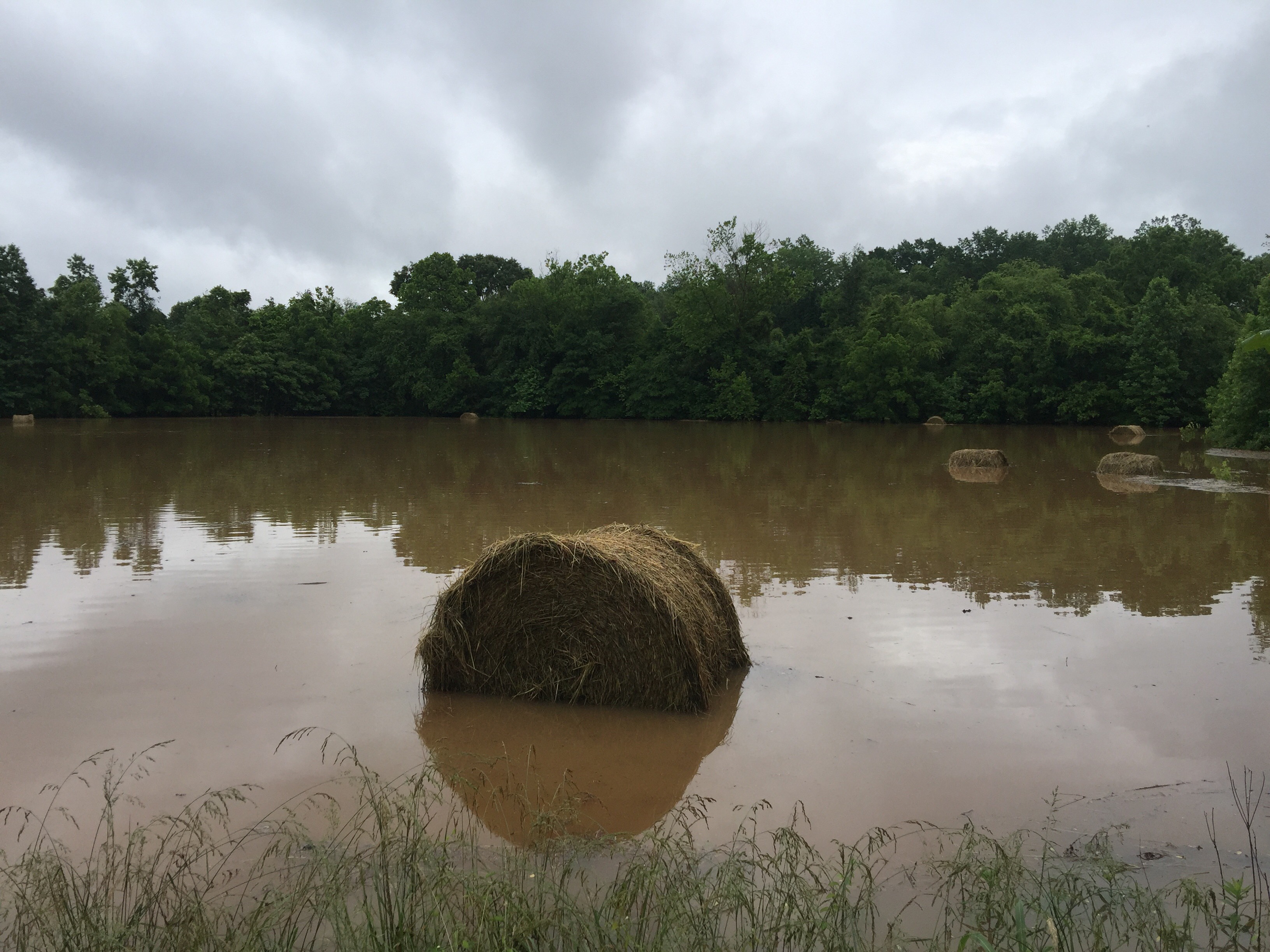 Many Farms Are Dealing With Flooding in Their Fields and Pastures. We Have Seen Incidences of Flooded Hay That Has Already Been Baled, Very Wet Hay That Was Mowed and Ready to Get Up, Hay That Hasn’t Been Mowed Yet, and Fields Too Wet to Plant. We Are Getting Questions About the Likely Impact on Hay, Pastures and Cattle Health.

Pasture-based livestock producers need to assess and document the loss of hay as soon as it is safe to do so. If a producer lost hay they should take photos of the bales (when bales are still on the property), or the place the bales were stored. Make sure to write down the number of bales, type, and quality of hay, and the estimated weight (or the size i.e. 4 x 4, 4 x 5, etc.). At this time, there is NOT Emergency Assistance for Forsyth County residents, but it’s still a good idea to document losses.

Other local counties are receiving Emergency Assistance for damage caused by the tornadoes on May 24th which MAY include damage to livestock feed/ay losses. In ordinary circumstances in order to be covered for emergency assistance, hay had to be baled, and the program will not cover hay that was cut and on the ground. Also, this program only covers hay purchased to feed or hay cut to feed. It does not cover hay that was cut to sell, so producers will likely need to document that they do own livestock and planned on feeding the hay that was lost.

After Hurricane Floyd in 1999, NC State Extension went to the flood zone after the water receded to determine the impact on hay that had either been flooded (totally or partially submerged in water) or that had been on higher ground out of the flood but still impacted by 10-15 inches of rain in a 24 hour period. Hay that had been flooded was found to be severely damaged with little usable forage remaining. The amount of rotted hay and mold in this flooded hay makes it of little value, and potentially a hazard to livestock. Hay that didn’t go under floodwaters was in remarkably good shape with only a couple of inches of damage to the outside of bales which was consistent with what you see in normal outside storage. Our best advice on flood hay is that if it was in at least 1 foot of water for one day then it is likely in very poor shape and should not be fed, but rather counted as a loss.

Due to this difference between hay that went underwater and hay that was on high ground, it is critical that producers carefully document hay that was flooded, relative to hay that was simply heavily rained on. It is a good idea for producers to call their County Extension Center to tell them their situation and to get advice.

Hay that was flooded in storage barns should be removed as soon as possible because it will start to heat and spontaneous combustion is a real possibility. This hay could be used for erosion control or composted, but likely will have little usable feed value.

Based on experience following Floyd, fescue pastures likely will not survive more than a couple of days of submersion. Due to the wet weather, most producers have not planted their summer annuals. Once it is possible to get back into the fields it will be critical to remove any forage residue by cutting and baling. It is recommended that you burn and kill the forage as well in order to get THE BEST stand of summer annuals. It is important to remove that residue so that the seeded annuals can emerge and grow without a lot of shading and competition for nutrients. In fields that were underwater, it might be possible to graze off the residue, but producers should be aware that there will be issues with dirt and other contaminants that came with the flood on the standing forage, and livestock are unlikely to eat it. Setting cutters very low (1-2 inches) will be important because much of the existing vegetation will be lodged. If there is not a great amount of residue and it is very flat on the ground then drilling through the residue is possible.

In the Piedmont of North Carolina, summer annuals should ideally be planted May 1-31, but can be planted through June 30th. If you have a field that has been underwater, it is likely going to have heavy leaching that has occurred, thus it will need additional nitrogen application.

Again, at this time there is not any emergency assistance for Forsyth County producers, but it’s always a good idea to document on an aerial map where the floodwaters reached, and some proof that livestock had to be removed. Our office may be able to assist with aerial photographs if needed. Making notes on a map and keeping a log of the timeline of when floodwaters receded and the days of grazing lost is important.

Make sure that a good quality mineral supplement is ALWAYS provided to your livestock and that they are eating it. Any livestock nursing babies will especially need a mineral with a high level of magnesium with our spring green-up, in order to prevent grass tetany.

Many plants are poisonous to livestock and there’s no way to address them all in one article. If you’ve had trees that have fallen over due to the extremely wet ground or have lost try limbs from wind damage be extremely vigilant about looking for wild cherry trees due to their high content of Hydrocyanic acid. According to an article in Dairy Herd Management. the lethal dose for sheep/cattle can be as little as 1 to 4 grams of plant material per kilogram of body weight and symptoms can be seen within as little as fifteen years. Also, watch for oaks and black locusts due to Tannin (Tannic Acid). See additional information on poisonous plants.

We also have a few other email lists you can subscribe to.